To his friends and family, he goes by Grant Kwiecinski, the30-year-old kid from north Detroit who grew up on a healthy diet of American funk, golden-age hip-hop, and dance music; the curious producer who first began making future-forward music during his formative years at Michigan State University, only to permanently abandon the classroom for the dance floor; and the fun-loving dude who’s the life of the party at every damn party. To the rest of the world, his name is GRiZ, the Denver-based multifaceted artist who’s funkin’ up dance floors worldwide with his self-described “future funk” sound, which mixes electronic music with his fiery live saxophone, energetic funk, and sweeping electro-soul.

In April, GRiZ released his celebrated sixth studio album,Ride Waves, receiving praise from the likes of Billboard, i-D, Office Mag, among others. As his most creatively ambitious, most sonically robust, and most personal project to date, the 14-track album features collaborations with major artists like Wiz Khalifa, Snoop Dogg, Matisyahu, DRAM, and Bootsy Collins, and sees the producer taking his sound toward uncharted territories in hip-hop, pop, and dance music, all while keeping the funky GRiZ sound intact.Ride Waves is GRiZ’s musical culmination following a full year of self-reflection and creative development, a time during which he initiated an extended, eight-month-long social media blackout to refocus on personal self-discovery and his own artistic growth.Ride Waves, then, is his expression of what GRiZ calls “the emotional roller coaster that is life,” with the album title reflecting all the exhilarating highs and painful lows we all experience on the daily.“ Sometimes in life, there are big-ass waves that you try and ride, and then you fail,” GRiZ says of the meaning behindRide Waves. “But then you choose toride the next wave with confidence. To me,Ride Waves is about how all the ups in life come with the downs. All the swells, all the tides—they come and go.”

Since the album’s release,GRiZ has released a series of EPs that stay true to his bass-heavy, dubstep-fueled roots, aptly titledBangers.Zip.The EPs are a call-back to his early musical stylings,one of which feature the massive hit “Griztronics”–an epic collab with riddim producer Subtronics that has reached nearly 1 billion streams via Tik Tok, #9 on the BillboardDance/Electronic Songs chart and a total of 7.5million streams across major DSPs plus 14million across YouTube in the US alone.

Sharing his sonic journey with fans around the world, GRiZ set out on Seasons One of hi Ride Waves tour this past summer, selling out venues like King’s Theatre in Brooklyn, The Met inPhilly, and two nights at Greenfield Lake Amphitheater in Wilmington for the second year of his personal-favorite GRiZMAS In July events.Season Two saw him return to the iconic RedRocks Amphitheatre for his fifth-year of double sold-out shows before heading out on an 18-city trek across North America with stops at Berkeley’s Greek Theatre, LA’s Palladium and Chicago’s Navy Pier.

GRiZ has remained one of the leading independent artists in electronic music throughout the years, from his 2011 debut album to his breakout album Good Will Prevail(September 2016) which debuted at #1 on the iTunes Electronic chart and charted on the Billboard200 chart—an impressive feat for a free release.A champion of the live electronic landscape, GRiZ’s live show is a spectacle unto itself. His live performances—which mix improvised saxophone, guitar, vocals, and more over booming basslines and head-knocking drops—have become massive draws around the world. In addition to mainstage performances at major festivals such as Lollapalooza, Movement and OutsideLands, this year he curated the historic SuperJam set at Bonnaroo, bringing over 25 artists together in celebration of music legends. GRiZ has also headlined sets at Electric Forest and Lightning in a Bottle, as well as his sold-out Red Rocks Amphitheatre double-headers inDenver for five consecutive years and counting. He also debuted the 15-piece GRiZ Live Bandat the beloved venue in 2017.

A shining force of positivity, GRiZ has preached his lifelong ‘Show Love, Spread Love’ mantra via his ongoing charity work and community activism. Via his annual run of GRiZMAS holiday shows at Detroit Masonic Temple, which has sold out every year since launching in 2014, and the coinciding 12 Days of GRiZMAS series, he has raised funds for music education programs within public schools across the greater Detroit area.

Over the years, GRiZ has donated well over $225,000 as part of the GRiZMAS shows. Since openly coming out as gay via a personal blog post on Huffington Post in 2017, GRiZ has remained a vocal supporter and active member of the LGBTQ community. During Pride Month this year, GRiZ was tapped to be the face of national underwear brand MeUndies’ Pride collection, donating a portion of the profit to the Happy Hippie Foundation, a nonprofit that rallies young people to fight injustice facing homeless and LGBTQ youth. He also performed at the It Gets Better LA Pride party in support of the organization that he partnered with in 2018 to help raise $7,000 on Facebook via their Giving Tuesday initiative. It Gets Better has used GRiZ’s Ride Waves track “It Gets Better” as part of their educational videos.Now withRide Waves under his belt, GRiZ is reaching for new possibilities via enhanced songwriting and improved production as he experiments with fresh genres and techniques on tour. GRiZ summarizes it best: “There’s so much growth on this album.” Cohesively, RideWaves captures the everyday experiences of human existence, all while soundtracked in GRiZ’s funkytastic fashion. 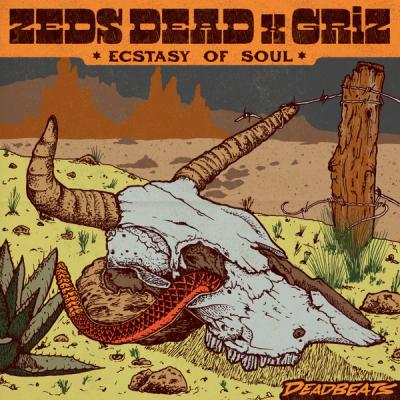 Zeds Dead x Griz - Ecstacy Of Soul
Be the first to notified about events in your area and more!